The History of NACD: Selling the Idea of a National Association

From the beginning, one man persistently and doggedly cornered chemical distributors and manufacturer' agents about organizing a national association until a few chemical distributors/agents agreed to meet for that purpose. That man was Gerald "Jerry" G. Kraft, Kraft Chemical Company, Melrose Park, Illinois, the "founding father" and first President of NACD. 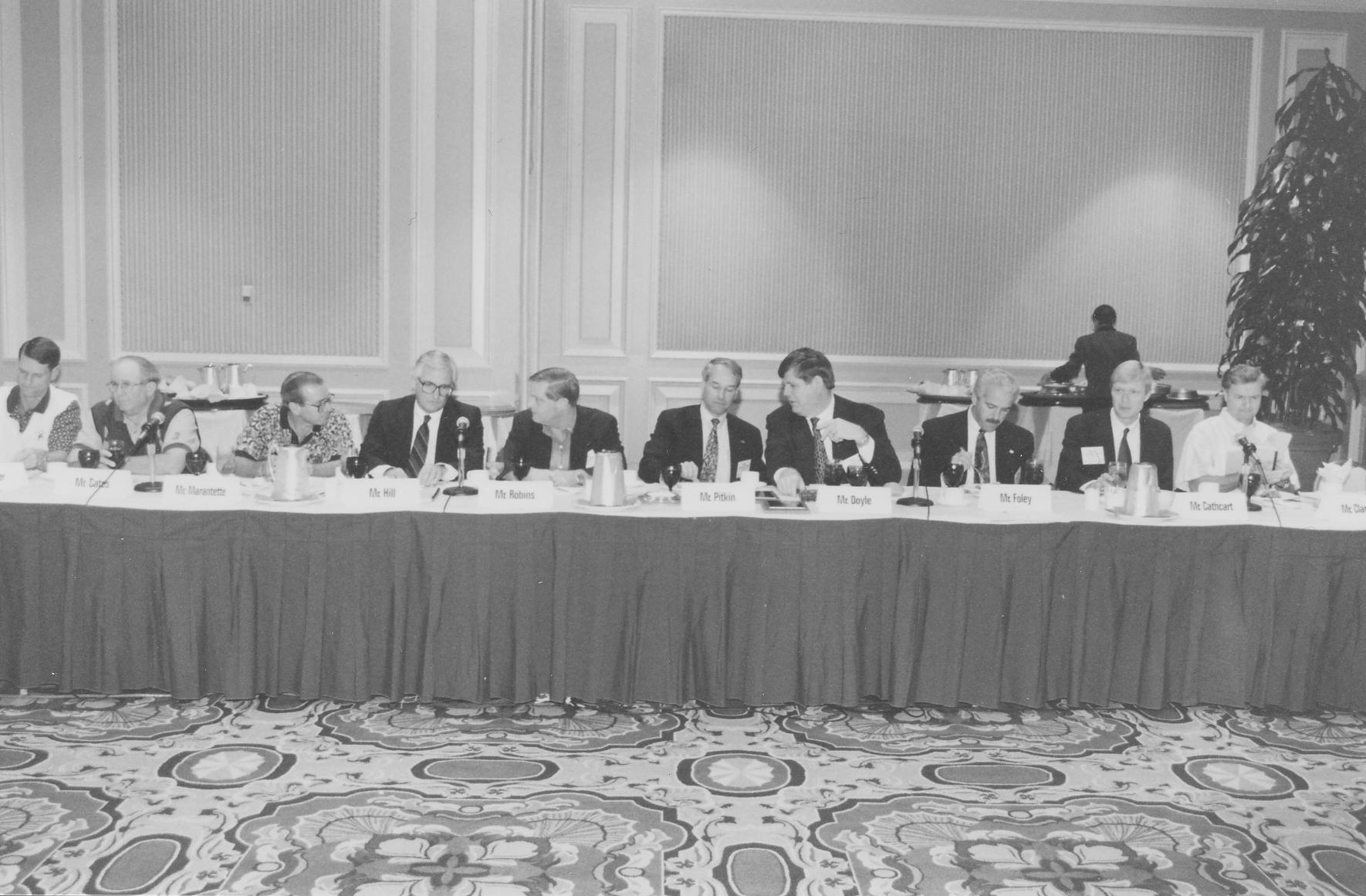 Jerry Kraft first started buttonholing distributors/agents at the 1969 Paint Show in Chicago, but he wasn't able to stir up enough enthusiasm because of the time constraints. During the next few months he continued to make telephone calls and was able to keep the idea alive.

A turning point occurred when he and his wife Ruth were vacationing in Miami and Florida distributor Jack Benham, J B International Marketing Corporation of Miami, joined the bandwagon. There were then two aggressive salesmen for the idea of a national association of chemical distributors. The result was an informal meeting of several distributors at the October 1970 Paint Show in Boston.

No records were kept of this first small meeting, and those present have hazy memories of all who attended. My apologies to anyone who was present and isn't on the following list: Gerald Kraft, Kraft Chemicals; Jack Benham, J B International; Michael Baker, Chem/Serv; Frank Smart, Chem Materials; Fred Boehle, Boehle Chemicals; Myrven Cron, Cron Chemicals; William Tate, Tate Chemicals; and Edward Rabon, Charles A. Wagner.

At this gathering, the formation of an association was seriously explored, possible under the umbrella of the National Paint, Varnish & Lacquer Association (NPVLA), which is now the National Paint & Coatings Association. The plan envisioned becoming a division of its Ad Hoc Suppliers Committee since all of us at the time were deeply involved in supplying raw materials to the coatings industry.

Jerry Kraft and Jack Benham visited with Robert Roland, then the Executive Secretary of NPVLA (and now President of the Chemical Manufacturers Association ) during November 1970. The association's Suppliers Committee turned them down.

The same small group then met in Chicago during January 1971, to form what was then being called the Association of Chemical Raw Materials Distributors and Manufacturers Agents. Jerry Kraft's attorney was present to make certain everything was proper from the beginning. It was agreed that all present would comprise the Membership Committee to recruit other distributors/agents for the new association.

By the time of the next informal meeting, in Chicago in March 1971, word has spread that we were indeed serious. Suddenly distributors supplying chemical products to many other industries showed interest in the new fledgling association.

Since I missed the March meeting, it wasn't until May 1971, that I met Joe Collie of Southchem, Inc., Durham, NC, and learned of the interest expressed in the new association by members of the already existing Southeastern Chemical Distributors Council.

At the March meeting Jerry Kraft proposed hiring a part-time executive secretary so that bulletins and minutes would be kept which would help membership growth. Within a few days Lester E. Stybr was hired. A name change was recommended by Joe Collie since ACRMDMA wouldn't exactly become a magnetic acronym. At this meeting the first constitution and bylaws were put together with further refinements to be handled by committee. 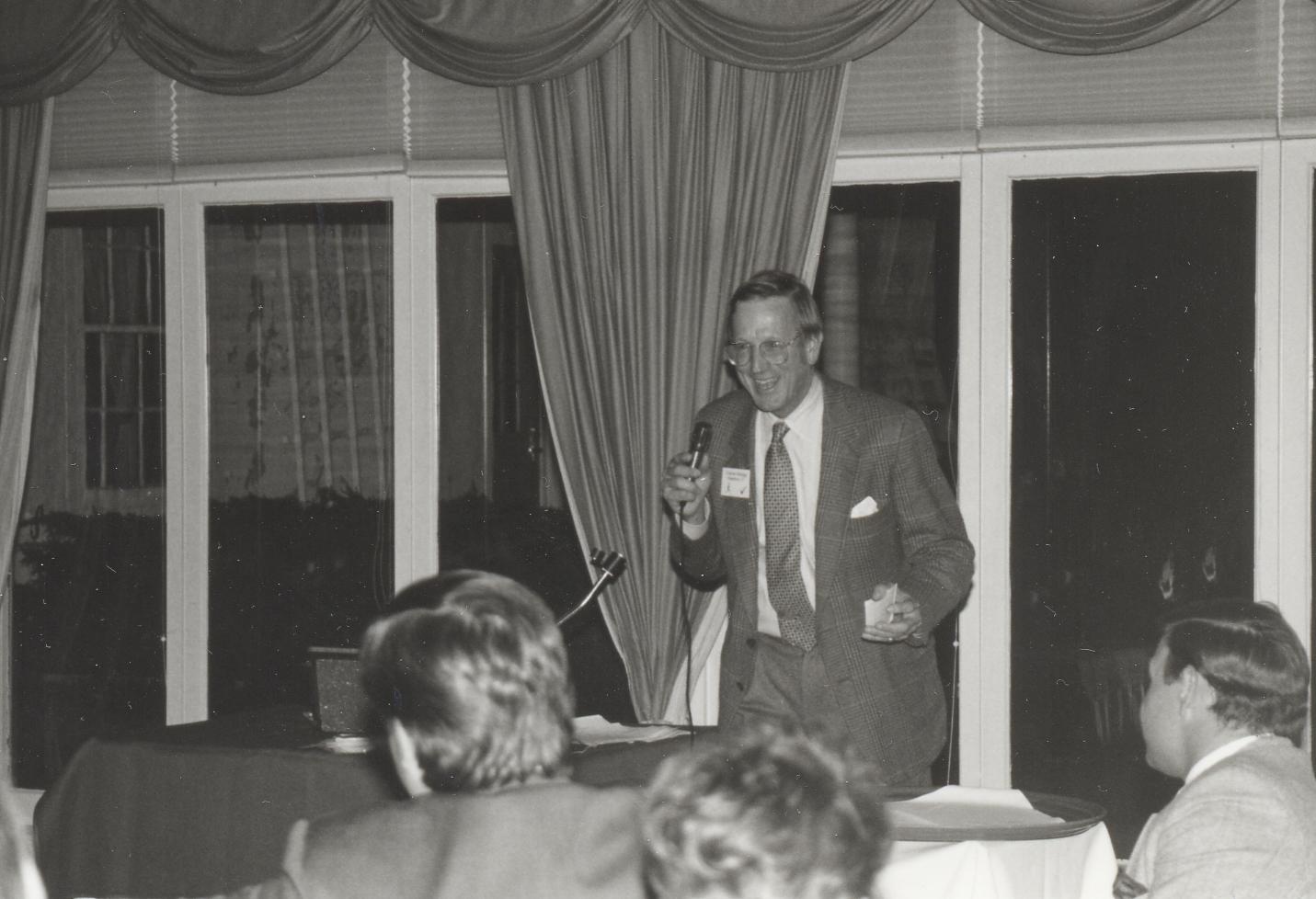 Another big breakthrough was the decision to hold an organizational meeting of the new National Association of Chemical Distributors  on May 5, 1971, at the Holiday Inn in Des Plaines, IL. By this time there were 20 members who were referred to as the "Committee of Twenty," mainly because we were all considered the Membership Committee.

Although Lester Stybr copied all of us with minutes of this meeting, regrettably I haven't been able to comes up with a copy, and memories are a bit hazy. We elected officers and directors, appointed committee chairs, approved a mission statement; established a dues structure; announced the availability of charter memberships; discussed mutual industry concerns; approved an official press release, and undoubtedly did other things that can't be documented today.

The purposes of the association were announced as:

Sales agents were then included as members as long as they did some warehousing and took title to goods. But as the years went by the distributor portion was stressed more and more, which caused one of the original founders to become disenchanted and resign. The first official meeting of the new association was on July 21, 1971, at the O'Hare Inn in Des Plaines, IL. Prior to the meeting, NACD Executive Director Lester Stybr asked all of the members to send him the names of potential new members—people we either knew personally or found in other trade association rosters and convention lists. He then compiled a large mailing list and sent out a two-page invitational announcement for the July 21 meeting.

At the meeting, the morning was spent on business issues, such as official ratification of the Constitution anf Bylaws, committee reports, and future priority projects. There were two featured leancheon speakers to attract both distributors and agents: William Hardy, Manager of Distributor Sales, Dow Chemical Company, who spoke on "Current Trends in Chemicals," with emphasis on the role of the chemical distributor in industry sales, and John Paul Taylor, Professional Manufacturers Agents, Modern Materials Associates, who spoke on marketing and distribution and how we fit. 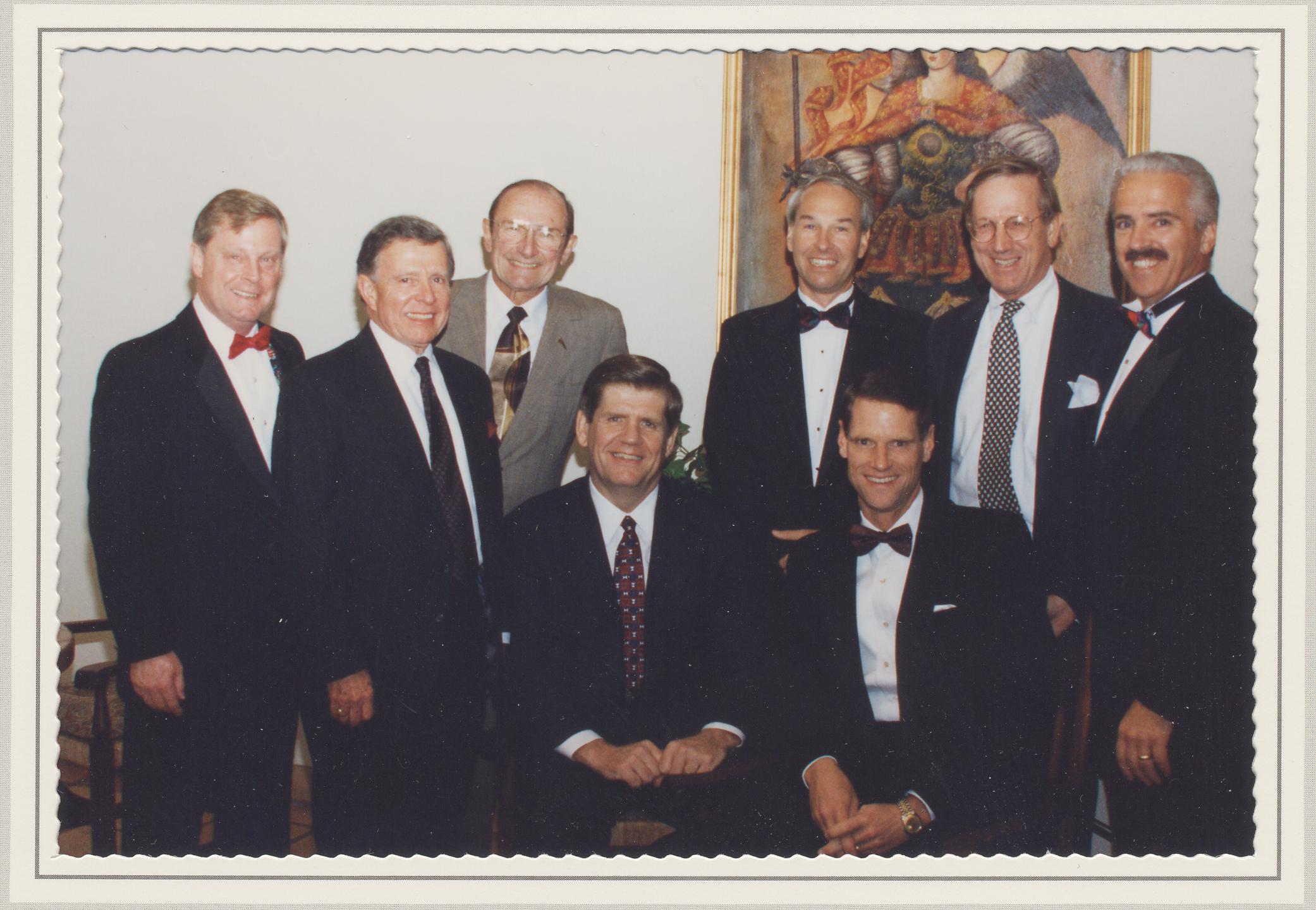 A number of new faces joined the ranks at this meeting, adding to both our numbers and our geographical spread. To name a few: Ray Preston, PB&S; Chuck Balkema, Haviland; Jesse Young, Jesse Young Company; and Bill Pitkin, Ulrich Chemical.

It was decided to hold the Fall Meeting in conjunction with the Paint Show to make it easier to attract new members. As Program Chairman, I was instructed to find a downtown hotel in Detroit for a luncheon meeting and to line-up a block of rooms for the October 26, 1971, meeting.

The meeting hotel was the downtown Howard Johnson's Motor Lodge. However, the Paint Show has every room booked during that week. But through a mutual friend, I met and had a couple of luncheons with the 'HoJo' lady sales manager and we got the rooms! 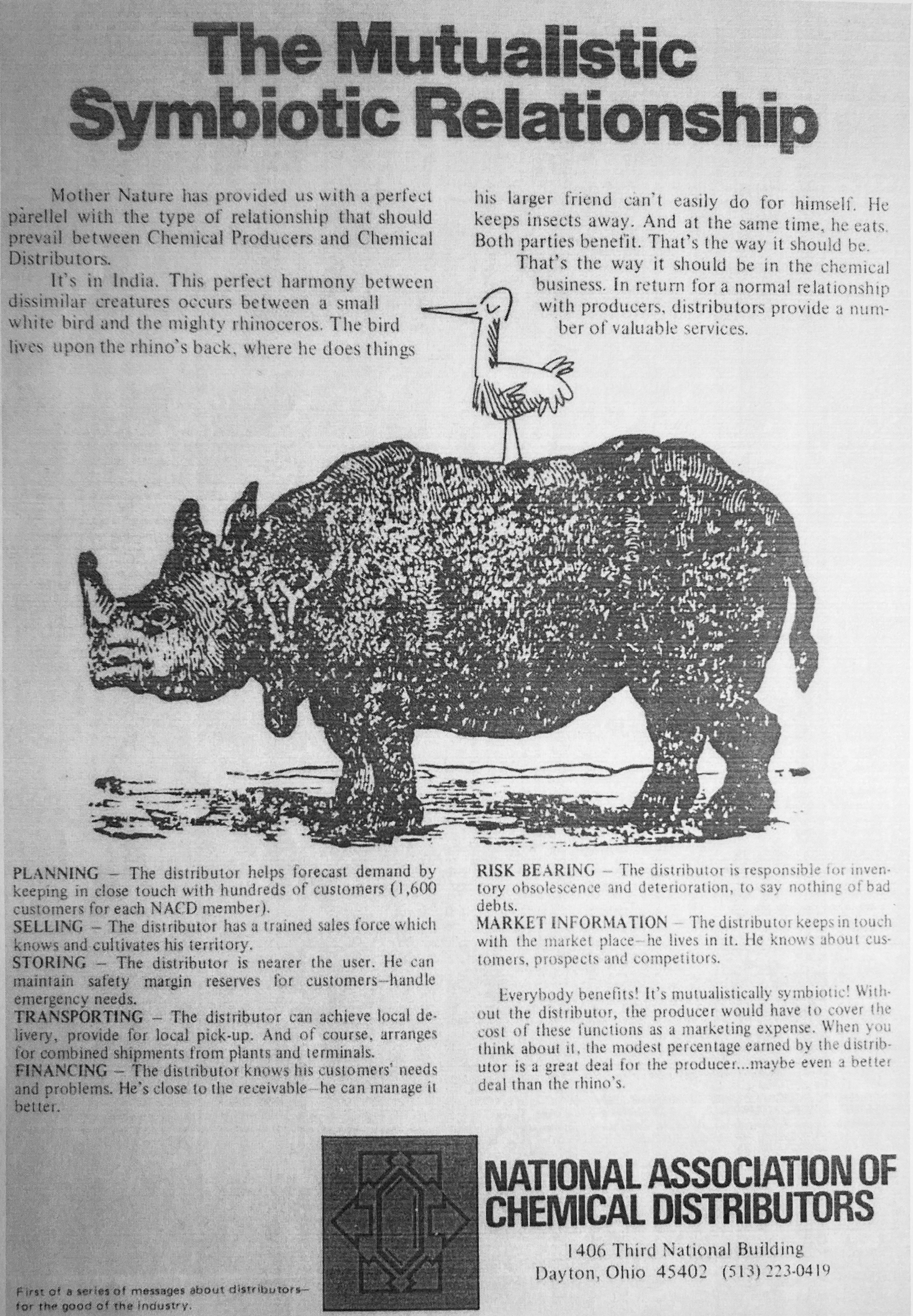 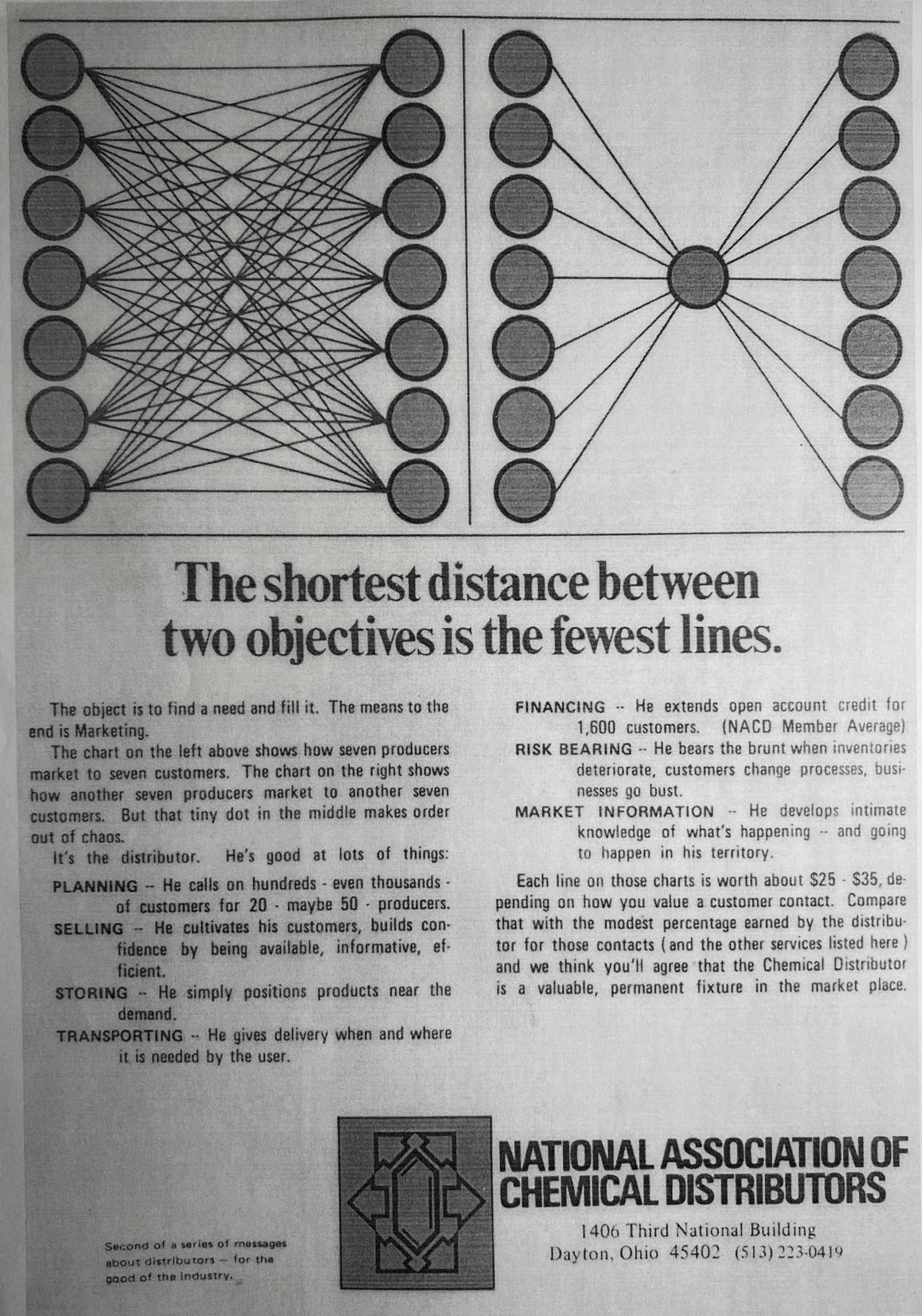 A History of NACD Award Winners

Distributor of the Year Award Recipients

The NACD Distributor of the Year Award is presented annually at NACD’s Annual Meeting.

Affiliate of the Year Award Recipients

The NACD Supplier of the Year is presented at NACD’s Annual Meeting.

The Responsible Distribution Excellence Award is presented annually at ChemEdge.